It’s Friday Morning. Egypt’s Friday is similar to America’s Saturday, meaning it’s the first day of the weekend. Normally, the start of any weekend is enough to make me ecstatic, but Spring Break began yesterday at The American University in Cairo, so I’ve got a long holiday ahead of me, and thus I find it hard to accurately express how happy and unfettered I feel at this moment.

I teach on Mondays and Thursdays, and I had an interesting experience in my Heroes and Villains freshman seminar yesterday. It was oral presentation day. Three or four weeks earlier, I’d put the students into teams and each had chosen a hero or villain they were interested in. They’d then spent the intervening time learning about their individuals and planning their talks.

There were five presentation teams. Three had chosen heroes—Alan Turing, Erin Brockovich, and Goku—and two had selected villains—Jack the Ripper and George W. Bush, the man who spent eight years pretending to be America’s president. Actually, our two villains turned out to have some remarkable similarities with the exception that Bush had a lot more comedic value—if you like black humor—than did his British counterpart.

What I really want to write about is Goku, the anime character with big muscles and long hair that seems to change color from one period to another in his life. For those of you who are unfamiliar with the superhero, I’ve included a few images. 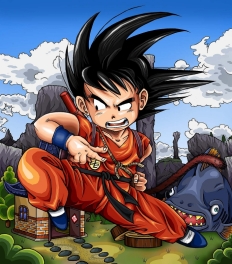 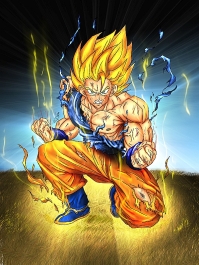 The Goku group was the fourth to present yesterday. After the third talk was done, I announced to the class, “Now for something entirely different. We’re going to hear from presenters on a hero I’m sure none of you have ever heard of.”

The students looked at me as if I’d just blasphemed. Sensing that I’d made a major faux pas, I said, “Show of hands. How many of you have heard of Goku?” Virtually everyone responded with an arm held high in the air.

I’ve always prided myself on being a hip, in the know person, but yesterday I was so far out of the loop it wasn’t even funny. For a moment there I felt like the sort of old geezer who lives in a log cabin out in the woods, a million miles off the grid. You know the type. He has no electricity or running water, couldn’t care less about fads and what’s hot in pop culture. The people in the nearby town see him tramping through the wilderness from time to time, his long beard hanging quite far down the front of his flannel shirt.

I recovered from that geezer feeling pretty quickly, though. Today, there’s no sign of it. What I’m feeling “the day after” is something akin to wonderment, especially now that I’ve done a bit of learning about anime and Goku.

Yesterday’s presenters introduced me to a world within this larger world. For the sort of people who inhabit it, have a look at this very interesting video snatched off YouTube. Much thanks to the anonymous human being who put it there.

One thought on “Goku to the Rescue”